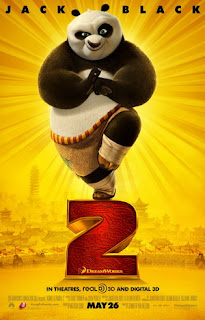 The makers of The Hangover: Part II should have watched Kung Fu Panda 2 for guidelines on follow-up films! Because THIS is how sequels should be made!
Po the pot-bellied panda is still a huggable darling, he’s still voiced by the inimitable Jack Black, he’s still an overweight practitioner of martial arts, in his role as The Dragon Warrior he’s still on a mission to save China and kung fu, and he still hangs out with the gang: Tigress, Viper, Mantis, Monkey and Crane. But this time the carefree Po of Part 1 is troubled by questions of his identity and his roots. He’s also up against a sinister white peacock whose parents had discovered the power of fire but also detected the evil streak in their son who would grow up to misuse it. Adding to the new plot elements in the film is the 3D which (if you don’t mind the dimness that continues to plague all 3D films) lends a fresh dimension to the breathless action sequences and the cuteness factor. As any human teenager or Po himself would tell you: it’s “awesomeness”!
The voice cast of this film reads like a Hollywood hall of fame that will have you rubbing your eyes in wonderment as the credits roll (yes, Michelle Yeoh and Jean-Claude Van Damme are new additions voicing the benign Soothsayer and Master Croc). Jack Black knows precisely how to portray the light-hearted Po who turns responsible at just the right time. Angelina Jolie proves with her turn as Tigress, that sexy is not about a hot body, a pretty face or luscious lips. Sexy is a state of being. You can’t see the actress, yet you can hear the smooth feline purr in her vocal intonations for the big cat. Gary Oldman’s nasty peacock Lord Shen is menacing despite his physical magnificence. And Po’s goose Daddy must rank as one of the cutest animated characters I’ve ever seen in a Hollywood film: everything falls into place for him – his dialogues, his back story, his sad eyes, his pouting beak and James Hong’s voice.
This is pure unadulterated entertainment with masterful voice acting, top-notch effects (including a very neat switch to more basic animation in the flashback scenes), sharp writing, lavish visuals and a sense of humour that is balanced impeccably with the film’s heavier portions. Panda 2 is also making several statements in an unobtrusively didactic fashion. Master Shifu’s lesson for Po is clear: to attain your goals you must first find inner peace. In young Shen’s ability to envision the destructive potential of fire power, surely there is a comment on our war-ravaged world. Watching the feisty Tigress should be a satisfying experience for the feminists among us: she refuses to pander to Po’s ego by camouflaging her own strength but she unflinchingly accepts him as the chosen one. Methinks Tigress is Hillary Clinton. And of course there are parallels between Po’s early years, Mary and Joseph’s escape to Egypt to save the Baby Jesus from King Herod’s men and – though I have no idea if the director and writers intended this – the story of Baby Krishna and Kansa.
But the loveliest element for me in Kung Fu Panda 2 is the completely, utterly charming reference to adoption. I suspect Americans don’t need that message as much as we reluctant-to-adopt Indians do, so please make note of it. Mr Ping the Goose hesitantly reveals to his panda son that he’s adopted. I kinda guessed, says the bear who probably knows a thing or two about the mating habits of species.
With the switch to 3D, the choice of villain is a masterstroke since it gives the film’s animators plenty of opportunities to swish that lavish plumage at us. On the downside, a couple of action sequences are unnecessarily stretched and noisy. And while cramming so many characters into one film, director Jennifer Yuh Nelson forgot to develop Viper, Mantis, Monkey and Crane who remain nothing more than Po’s sidekicks to us. That apart, since it’s all so well put together, the good news is that the film’s ending leaves us with the very obvious promise of a Part 3. I won’t tell you what that ending is, but I’ll certainly say this: there were sparks between Tigress and Po in this film. If a romance doesn’t blossom in the next sequel, then that’s probably what the producers are saving up for Part 4 ... and biology be damned! Now that’s what Po would call “awesomeness”.
Rating (out of five): ***1/2

Posted by Anna MM Vetticad at 3:05 AM