They can’t go to the cities, the sun will destroy them, says a character halfway through Priest.
Comes the response: There is no sun in the cities any more. 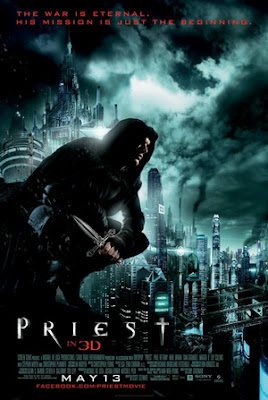 I may be off by a word or two which is why I’m not putting those sentences in quotes. You see, my concentration slipped because it was around this point in Priest that I felt the urge to giggle. I mean, I’m sure that exchange was intended to be very intense and intellectual and profound and all that, but I have a simple question: what the heck does it mean?!!!
Priest is the sort of film that tries to fool viewers into believing that great apocalyptic occurrences are unfolding on screen simply by putting characters into flowing cloaks and hooded cassocks in dark, ominously dingy settings. It’s the sort of film that thinks if the sound effects and background score are loud enough, and a few sweeping landscape shots are thrown in, then audiences will fail to notice that nothing much is actually happening on screen and nothing that any character says amounts to anything. It also comes from a team that seems to have forgotten that after having seen Avatar, it really takes a helluva lot to draw us in simply with the lure of 3D.
Like everything else in this film, the story too is hare-brained-trying-to-pose-as-scholarly. Priest is about an excommunicated warrior priest (Paul Bettany) out to save his niece who has been abducted by vampires. The church – represented by Christopher Plummer, no less – refuses to acknowledge that a threat from vampires still exists, but our hero won’t listen because he’s determined to get the girl back before she is “infected”. He’s joined in his quest by her lover (Cam Gigandet, I’m not saying “boyfriend” because I think “lover” is more appropriate to the atmospherics here) and a pretty priestess (Maggie Q) who … hmm, how do I put it? … seems to have the hots for our leading man.
Along the way, they battle ugly shiny beings that fly, mucus baubles, what seems like vampire faeces with which the vile creatures spin their webs and bags of what looked to me like mutton hanging in a butcher shop but turned out to be vampires in slimy cocoons. Ugh! The entire goal appears to be to repel us so much that we get awe-struck. Though the art direction gives the settings an other-worldly feel, the combatants ride earthly motorcycles and the grand climactic fight sequence is filmed atop a train that seems to have come from an era gone by (this bit is quite nicely done, but certainly not enough to save the film)!
It’s weird that actors like Bettany and Maggie Q agreed to be a part of this asinine project. They do their best, which doesn’t add up to much given the material at hand. In fact, Bettany reminded me a little too much of the misguided monk he played in Da Vinci Code, though in Priest he takes his shirt off to give us a generous glimpse of a very nicely worked out torso. That’s one of the high points of this film.
Once his niece is saved, the priest returns to the head of the church. I was slightly sleepy at that point, so I can’t tell you exactly why the bossman says to him: “There is no vampire menace. The war is over, priest.” The grave reply is: “No, it’s just the beginning.” Eeeks, there’s gonna be a sequel?!!
Rating (out of five): *1/2
Photograph courtesy: http://en.wikipedia.org/wiki/Priest_(2011_film)
Posted by Anna MM Vetticad at 11:05 PM