REVIEW 12: PIRATES OF THE CARIBBEAN: ON STRANGER TIDES (3D)

It’s important that I start off by telling you that I’m not a Pirates of the Caribbean kinda gal at all. Sure I found the first instalment of the series entertaining, but that’s primarily because director Gore Verbinski’s POTC: The Curse of the Black Pearl had novelty value. Then came Dead Man’s Chest and At World’s End – both from Verbinski – through which I was either suppressing yawns or nausea as I watched Johnny Depp’s by-now-increasingly-tedious quirks as Captain Jack Sparrow, Davy Jones’ ugh-able beard, that hideous Kraken with its revolting tentacles and suction devices, and other ewww-worthy sights. 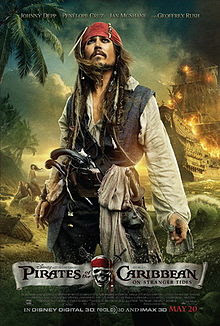 Pirates of the Caribbean: On Stranger Tides comes to us with a new director, inspiration from the novel On Stranger Tides by Tim Powers, a shift to 3D and the entry of God’s gift to humankind, Penelope Cruz. It cuts out the repelling visuals, delivers to us the prettiest sea-creatures I’ve seen on the big screen in a long time and ends up being a really fun experience!
The story is intricate, but this time thankfully not so crowded as to be confusing. England’s King George II wants Jack Sparrow to join an expedition to find a Fountain of Youth, with pirate-turned-privateer Hector Barbossa (Geoffrey Rush). Jack learns from Barbossa that his former ship the Black Pearl was destroyed in a battle with the legendary pirate Blackbeard. Jack escapes the King’s men but bumps into his fiery old flame Angelica (Cruz) who drugs him and drags him on board Blackbeard’s ship where he’s forced to serve as navigator, again in a quest for the fountain. Blackbeard wants to drink from it to prevent his imminent death that has been foretold. To complicate matters further, the Spanish are headed for the fount too.
On the face of it, Rob Marshall is an unusual choice of director for this film. He is best known for his multiple-Oscar-winning musical Chicago. But clearly producer Jerry Bruckheimer knew something we don’t, because Marshall has added a much-needed softness to Pirates, pared it down, cleaned up the clutter and made it his own. The long action sequences are well choreographed, most especially the chase scene at the start and the arrival of an army of mermaids. Jack doesn’t hog screen space in this film, which gives us enough respite from his eccentricities to enjoy them while he’s around without getting overwhelmed or bored by too much of him. Cruz is the perfect choice to play a woman who is the only one for whom wacko Jack has felt any “stirrings”, though a fine actress like her deserved to be challenged a bit more. Ian McShane makes a nicely nasty Blackbeard, but my pick of the cast is Rush who seems to be having a rollicking time reprising his role as Barbossa who now has a peg for a leg that also doubles up as a keg. Oops … I promise I didn’t mean to make a rhyme there, it just happened.
Though not necessarily crackling throughout, the dialogue is drolly humorous at most times, the high point being an ever-so- brief exchange between Jack and his dad played by Rolling Stones’ Keith Richards. And after a long time, here’s a Hollywood film in which the 3D really makes a difference. While watching Tangled last year, I remember wanting to reach out and grab those lanterns when they were released from the castle. In Pirates 4, the third dimension is worth the weight of those burdensome glasses on your nose and the dimness that’s the bane of all 3D films. The jungles appear more ominous because of it, that monkey is an even stranger critter than when we saw him first, and oh those lovely mermaids … what do I say to you about those graceful silver creatures swooshing through the sea waters, their luminous faces beaming at vulnerable men, their fish scales wisely camouflaged in the deep?! Their appearance leads to a romance between an imprisoned mermaid called Syrena and a cleric who worries about Blackbeard’s soul (a moralistic stance that is thankfully not stretched so much as to take away from the film’s otherwise light, cheeky, self-deprecating tone). This unusual love story is poignant in contrast with the more sexually charged chemistry between Depp and Cruz.
Let me make myself very clear: Nothing that I’ve said in this review should be misconstrued as meaning that I would like to see another Pirates of the Caribbean film. On Stranger Tides would have been a nice swan song for this series. Sadly, enough clues have been left around in this film to indicate a follow-up. That’s a pity because however brilliant Johnny Depp may be, I can’t take another film in which he’s leaning on the crutches provided to him by the physical peculiarities and/or behavioral idiosyncrasies of the characters he’s playing. I realise that I have just blasphemed in the eyes of Depp devotees, but what I really really want is to see a series of 10 back-to-back releases in which Depp is just a regular working guy in a modern city, without heavy eye make-up or mincing steps or scissors for hands or a penchant for human meat pies.
Perhaps that’s asking for too much, so let me just say Pirates of the Caribbean: On Stranger Tides is a complete entertainer. It’s not a work of genius, and it’s possible that one reason why I like it so much is that it has fixed all the problems I had with Parts 2 & 3. I’m not going to analyse my reaction too much. For a pleasant evening out I’d recommend Pirates 4 to you!
Rating (out of five): ***1/4
Photograph courtesy: http://en.wikipedia.org/wiki/Pirates_of_the_Caribbean:_On_Stranger_Tides