Imagine if you were sent back into the past to investigate an accident in the present, but you chose to manipulate that past instead. Well, then the future would no longer be the present from which you were sent into the past, now would it? No spoilers here at all, but that’s kind of what Source Code is about. Kind of. 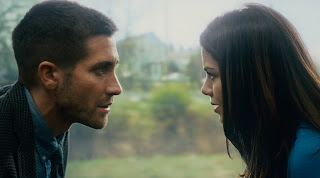 The film is directed by Duncan Jones, the full extent of whose imagination some of us might have unwisely thought we’d seen in Moon. We thought wrong, of course. In Source Code, Jake Gyllenhaal plays US soldier Colter Stevens (or is he?) who wakes up in another man’s body (or is it?) on a train one day. He’s seated opposite a pretty girl called Christina who seems to know him (or does she?) and is continuing a conversation that seemed to have got interrupted when he dozed off. Shortly afterwards, the train blows up and Colter finds himself confined in a decrepit-looking metallic capsule, physically drained and in conversation with a lady on a screen: Goodwin is his commanding officer of sorts and explains that he’s been sent into the recent past to probe a train bombing. Through the facility of a computer programme called the source code, he can access the last 8 minutes of any past incident, and he’s been transported to that train blast to find clues that will help the authorities prevent similar attacks. He can’t change anything in the past, he can only gather intelligence which he must report back to his bosses.
The film is a pacy sci-fi thriller that floats a theory so far-fetched, it could actually become a reality some day. As Colter is sent repeatedly into that train, it’s hard not to remain glued to the screen wondering how far he will succeed in his investigations; where the truth ends and falsehood begins; how far science must be permitted to use unwilling individual humans – dead, alive or incapacitated – for the greater good of humankind; what will happen if affection develops between Goodwin and Colter; what will happen if Colter is attracted to Christina; why arrogance makes people in charge forget that their creations may not always remain in their control; and so much more.
Jones keeps the drama so taut that there’s no time to scoff at the bizarreness of the situation he presents to us. Clearly, with Source Code he’s got a larger budget at his disposal than when he made his directorial debut with the relatively bare-bones but hugely imaginative Moon. But unlike so many film makers who waste the extra cash on nothing more than gloss, Jones puts the money to good use with effective-not-overwhelming action and special effects plus an appropriate choice of locations. He’s aided in this fascinating film by Ben Ripley’s crisp writing and a lovely cast. Jake Gyllenhaal knows just how to bring desperation, confusion and confidence, humour and humanity to a very demanding role, though that might be stating the obvious about an actor who did what he did in Brokeback Mountain! If Moon had Sam Rockwell’s astronaut playing off the robot Gerty voiced by Kevin Spacey, then in Source Code the director takes it a step further with the touching warmth between Colter and Goodwin-who’s-just-a-face-on-a-monitor played by the luminous Vera Farmiga. It’s a reminder that even the most carved-in-stone procedures and processes must take into account the fact that they are being implemented by humans, not machines. Like Farmiga, Monaghan too lends subtlety to her role as a woman who must appear increasingly surprised at Colter’s erratic behaviour each time he lands on the train, although each time is the first time for her.
Sounds complicated? Well, it’s intricate but not convoluted, so if you pay a reasonable amount of attention you’re unlikely to miss anything. And attention is something you’ll probably volunteer anyway as you go along with Colter on this unusual train ride. Don’t go comparing Source Code to every other film you’ve seen that involves time travel / time loops / memory lapses / mind manipulation. Don’t go comparing this film to Groundhog Day or Lake House or Memento or The Manchurian Candidate or anything else that comes to mind. It’s unique.
The action in Source Code is swift, the twists and turns unexpected. Indian viewers can take note of the presence of Canada-born Anglo-Indian actor-comedian Russell Peters playing one of the passengers on Colter’s train. And in the last scene, as a couple walk through Chicago’s famed Millennium Park, look out for India-born UK-based sculptor Anish Kapoor’s world renowned Cloud Gate structure.
These are just asides, of course. The thing about good science fiction is that it gets the tempo and grammar so spot-on that nothing seems ridiculous, everything seems possible. Just like it is in Source Code.
Rating (out of five): ***1/2
Posted by Anna MM Vetticad at 11:56 PM