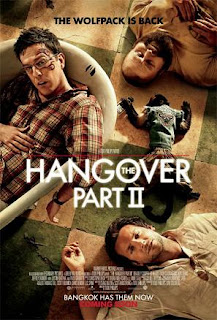 The Hangover: Part II is not really a sequel. Frankly it’s not even a remake. What’s the word in the dictionary for a film in which you take the story of a sleeper hit, transport it to another location with precisely the same actors and characters, then proceed to replicate the exact same story with not a single innovation? I think the word I’m looking for is “repeat” or a noun that means “unimaginative film”.
I kid you not! The Hangover II actually takes the same quartet of friends from the first film (Phil, Alan, Stu and Doug); travels to Thailand in the week of Stu’s wedding (instead of Las Vegas within the US like they did the first time); something happens during an all-boys drinking  session on a beach; and they wake up the next morning in a seedy Bangkok hotel to find themselves completely wasted and the bride’s teenaged brother missing. They can’t remember anything about the previous night, of course. But like us, they do recall the story of Hangover I, so they rush to the hotel terrace to see if they’d abandoned the kid there. The film is about the countdown to the wedding during which they must recover their memories, retrace their steps through that wild night, find the boy, and get to the ceremony in time. Along the way they brave biker hoods, drug dealers and a calm yet murderous gangster. Even Mike Tyson resurfaces in what must rank as one of the most ordinarily crafted celebrity guest appearances in Hollywood history.
So what’s new? Well, in place of the tiger there’s a drug-dealing, smoking monkey here (by smoking I don’t mean smokin’ hot but that the animal enjoys cigarettes). And Paul Giamatti stars as the suave criminal the friends must contend with. Bradley Cooper as Phil is as hot as ever. Justin Bartha as Doug is as cute as before. But I really don’t need to watch a nearly two hour movie just for the joy of seeing them; I could buy posters and stick them on my wall instead. Zach Galifianakis (Alan) is the only one in the group who manages to elicit a few laughs, but frankly, in the midst of all this sameness, it’s not enough. In fact, I have to say he was far funnier playing a similarly obnoxious character in that recent crazy road movie Due Date directed by The Hangover’s Todd Phillips and co-starring Robert Downey Jr.
But let me be fair. The film is not entirely a no-hoper. It starts off well. The initial scenes in which Stu meets his fiancée’s family are amusing especially Alan’s speech about Stu. And did I mention that Bradley Cooper looks gorgeous?! I suppose if you haven’t seen Part I or if you are completely undemanding as a viewer, you might like this sequel. But the joy of watching The Hangover with all its crudeness and sexcapades was its novelty. Part II takes fans of the first film for granted. And what is saddening is that with this one getting a massive opening in the US, and with two more friends from the gang still unmarried, there’s likely to be a Part III and a Part IV: same story, different city, different groom and a new animal plus yet another cameo by Mike Tyson. C’mon, we deserve better than this!
I died of laughter watching The Hangover. I may just die of heartbreak if the producers further insult those of us who contributed to their film’s success, by repeating the repetitions of Part II in Parts III & IV!
The tagline for this film reads: “The wolfpack is back”. It should have been:  “The wolfpack is back … and they have nothing new to say … and they’ll be back twice more!”
Rating (out of five): **
Photograph courtesy: http://en.wikipedia.org/wiki/Hangover_2
Posted by Anna MM Vetticad at 11:29 AM