It’s a familiar story on unfamiliar ground. We all know Red Riding Hood, the classic children’s tale about a much-loved little girl and her grandmother who are saved from a wicked wolf in the forest by a woodcutter. In the hands of director Catherine Hardwicke, it becomes a saga of werewolves and ruined relationships, wealth-versus-true-love at the marriage stakes and all sorts of other things that I can see it’s trying to say but doesn’t quite manage to. 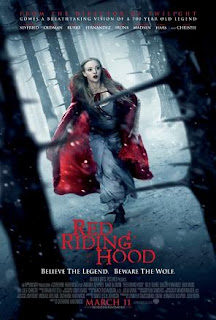 Some of this is not surprising at all considering that Hardwicke’s the one who shook up the world box-office with her vampire film Twilight. And after all, there’s no rule saying you can’t adapt/re-write a classic. But there should perhaps be an international law banning silly, pretentious, frantically-aspiring-to-be-intellectual re-interpretations of old stories.
Red Riding Hood the film is about a beautiful young woman called Valerie in the village of Daggerhorn (time and country unspecified). Valerie loves the local woodcutter Peter but her parents have promised her hand in marriage to Henry Lazar, the son of a well-to-do blacksmith. Their love triangle is played out against the backdrop of a larger danger that constantly dogs Daggerhorn: a werewolf that terrorises the population. One night, when the beast attacks the hamlet, he asks Valerie to go away with him. Since she’s the only one who understands his tongue, she is assumed to be a witch and is imprisoned by Father Solomon, an outsider who has been brought in to destroy the werewolf. He explains to the villagers that the demon dwells among them in human form by day, and is clearly someone who wants Valerie very much. So is it Peter? Or Henry perhaps?
The manner in which the guessing game is played out is the stupidest part of the film. Since this is Red Riding Hood, there is a grandmother who lives in the woods, of course. Playing the old lady is veteran Julie Christie who overacts to embarrassing effect in a bid to make us suspect that she’s the fiend-in-human-clothing.
Down the centuries, the story of Red Riding Hood has come to mean many things to many people. Some scholars have seen it quite literally as a lesson to children that they should not stray away from the right path. For others it’s been a comment on the dangers of the unknown lurking in the forest away from the known space of the village. And yet others have understood it to be a morality tale about the sexual awakening of young women and sexual predators who prey on innocent girls. Hardwicke’s Red Riding Hood is trying to say many equally profound things but ends up saying too much, which adds up to nothing at all because of the absurdity of the proceedings.
Take for instance the Biblical allusions being made through Father Solomon, the Christian priest who is also a witch-and-werewolf hunter. As a man who killed his own wife because he discovered she’s a werewolf, I suppose he is meant to represent the severity of organised religion, especially in medieval Europe. The only black people in this film are the holy man’s henchmen – one of them ultimately kills Solomon when the padre himself is bitten by the werewolf. A point is possibly being made here about racism, the rebellion of the suppressed classes, and the rule book being thrown right back at the ruling elite by a once-subjugated people. You see, Father Solomon had earlier slaughtered the black man’s brother who’d been bitten by the werewolf, with the justification that any human once bitten would become a werewolf himself. Or perhaps the reference is to the wise and wealthy King Solomon in the Bible – actor Gary Oldman certainly dresses up for the part in regal robes.
There are other issues this film raises through its characters. The incarceration of Valerie harks back to the witch hunts in Europe and America which feminists believe were a perfect excuse to target smart, outspoken women: in this instance, Valerie’s sprightliness and uncommon agility are cited as proof of her links with witch-craft. A mentally challenged child’s disability is misconstrued by Father Solomon as evidence of his connection with the werewolf. Solomon himself is a confusing character since he’s uncompromisingly harsh at one level and yet, contrary to what everyone thinks, he is not really throwing Valerie to the wolves (I know, terrible pun! Sorry!). But none of it works because of the ridiculous attempts to manipulate the audience while we try to guess the identity of the werewolf.  As our old F.R.I.E.N.D. Chandler Bing might have said: Could grandma’s eyes GET any wider? Could she BE more obvious? Could this film BE any sillier?
Amanda Seyfreid – the nasty Plastic from Mean Girls and Meryl Streep’s daughter in Mamma Mia – tries hard to lend believability to the goings-on in Red Riding Hood. So does production designer Tom Sanders who gives Daggerhorn a suitably sinister and old-world look. But that’s not enough to salvage this film with its foolish storyline, childish direction and muddled writing. Take for instance the conservatism that surrounds Valerie. It doesn’t stop her from seeking out some action in a haystack with a lover – which is a perfectly understandable way of illustrating that she’s a girl with a mind of her own. But how come none of the stiff-necked grown-ups around raised a single eyebrow at her unabashed lesbian dance with another girl at what seemed like an open-air rave party? Maybe the ‘message’ of the film is that we will all find the bad girl within us if we get our parents sufficiently drunk!
But the low point of Red Riding Hood is a dream sequence in which Valerie repeats those famous lines from the old story: “Grandma what big eyes you have!” … “Grandma what big ears you have!” … “Grandma what big teeth you have!” All the better to make us laugh.
Rating (out of five): *1/2

Photograph courtesy: http://en.wikipedia.org/wiki/Red_Riding_Hood_(2011_film)
Posted by Anna MM Vetticad at 4:02 AM