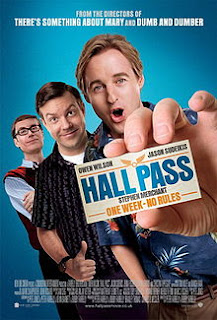 This one’s not so much a review as a reviewlet. Because honestly, Hall Pass doesn’t merit thought or analysis! The film revolves around Owen Wilson and Jason Sudeikis as middle-aged married men who get a “hall pass” from their wives. That’s a week off from marriage to do whatever they want minus any consequences – fool around, sleep around, whatever!
It’s the sort of harmless story that lends itself to some good laughs. And things were moving along smoothly enough until the directors decided to give in to their baser instincts and ruin a potentially unmemorable-yet-entertaining film. Ah well, why was I expecting anything else from the Farrelly brothers?
The film’s appealing lead cast really owe themselves better than this level of crap … oops, did I just use that word on my blog?! But seriously, Wilson especially has such a likeable personality that it’s hard to despise him even in the middle of this faeces-and-fart fest.
Don’t get me wrong. I’m not too snooty to enjoy an occasional mindless, even cheap comedy. But I draw the line at watching an obese man shit on a golf course, then cover up his excrement with sand and run across the fairway while his shorts are still not over his expansive bum. And I certainly draw the line at a sexily dressed woman who spews diarrhoea on to a bathroom wall. If you can manage to wipe that crap (oops I did it again!) out of your mind’s eye, then you may find Hall Pass an amusing film.
Rating (out of five): **
Photograph courtesy: http://en.wikipedia.org/wiki/Hall_Pass_(film)