The Lincoln Lawyer is one of those films that’s not trying to impress anyone and so manages to do precisely that. It’s an understated film about a hard-nosed LA lawyer named Michael Haller (Matthew McConaughey) who operates from the back seat of his car. Hence the title. The vehicle bears the number plate NT GUILTY which is an early indicator of what a cocky guy Haller is. He doesn’t really care who he’s defending just so long as the money is coming in. But what happens when conscience strikes? 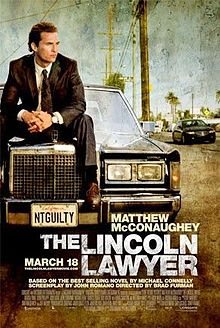 One day Haller is hired by a blue blood who’s been accused of beating up a woman he met in a bar. Young Louis Roulet (Ryan Phillippe) is calm, collected and determined to get a trial to prove that he is NT GUILTY. He has a back story that should evoke our sympathy but there’s something about him – and his perfectly coiffured mother – that’s not very likeable from the moment you set eyes on them (good job Mr Phillippe and Frances Fisher!). Haller suspects that there’s more to this case than meets the eye. But is there? He is helped along in his work by his ex-wife and fellow lawyer Maggie (Marisa Tomei) with whom he shares a child, a very deep friendship and sometimes – still – his bed.
The plot moves along at an unhurried pace in the way life usually does. It isn’t a speedy thriller, but feels like what real courtrooms probably are when Ally McBeal, Sebastian Stark and Denny Crane are not in the building ... less glamorous, filled with people doing laborious work. The not-so-glitzy atmosphere is vastly different from L.A. Law, an old legal serial that was aired in India and was written by The Lincoln Lawyer’s screenplay writer John Romano.
The supporting cast are all lovely particularly the charismatic Tomei who deserves so much better than the cards Hollywood has dealt her since she won an Oscar for My Cousin Vinny. William H. Macy makes his presence felt in a small role as private investigator Frank, as does Laurence Mason as Haller’s fond driver Earl. But the enterprise belongs primarily to McConaughey who conveys Haller’s moral dilemmas with as much simplicity as the director tells us his story. And yes, to answer your question, he does take off his shirt in one scene, but this film is not about that McConaughey. Shame on you for asking!
The Lincoln Lawyer is based on a bestselling book by Michael Connelly. If I have a problem with it, it’s with the conclusion that feels like it’s too stretched and trying too hard to surprise us but ends up being confusing instead. The film didn’t need that final twist either. Because until then I was having a fun ride in that ol’ Lincoln Continental sedan.
Rating (out of five): **9/10
Photograph courtesy: http://en.wikipedia.org/wiki/The_Lincoln_Lawyer_(film)
Posted by Anna MM Vetticad at 1:52 PM