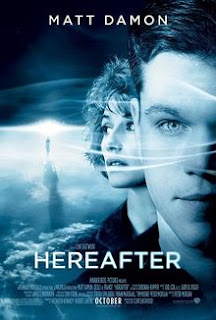 “You know, knowing everything about someone seems nice … but really … it’s actually better to hold stuff back.”
It’s a line that’s delivered with the sort of lack-of-drama that we have come to associate with Matt Damon. And yet it’s a line that underlines his tragedy more than anything else in this film where he plays George, a retired psychic in San Francisco who can speak to the dead. It might seem like a gift, but as George points out to his brother, actually “it’s a curse”. Try dating, when just the touch of a woman’s hand gives you a connection with someone she has lost. We see it for ourselves when the pretty girl in George’s cooking class (Bryce Dallas Howard) breaks up with him almost as soon as they hook up, because her dead father spoke to him.
At another end of the globe, celebrity French TV anchor Marie Lelay (Cecile De France) is vacationing with her boyfriend when a tsunami strikes. She suffers a near-death experience that changes her life forever. Back in Paris, she can’t forget the light she saw, or that lightness of being, or those hazy figures that still sometimes steal into her mind.
And in London, two delightful twin brothers – Jason and Marcus played by kid prodigies Frankie & George McClaren – are constantly looking out for each other. They also cover up for their drug-addict mother when Social Services comes calling. When Jason dies in an accident, Marcus – the quieter, shier, more dependent one – is left desperately seeking evidence that his beloved sibling is still around.
George … Marie … Jason … Three people whose lives we know will intersect at some point. But like everything else about this film, that point is reached in an utterly unhurried fashion.
It’s a film that has the potential to be silly and cheesy (look no further than Manoj Night Shyamalan’s works post-Sixth Sense). But under the helmsmanship of 80-year-old Clint Eastwood, Hereafter becomes a moving portrait of loss and longing. Dirty Harry sure has it in him to be mellow! The film doesn’t insist that you believe in an after-life. It simply suggests it to you as a possibility. It doesn’t demand that you should believe in psychics. It merely points out that while there are fakes, there may be some who are sincere too. And as is always the case in such films with multiple strands, though the manner in which the three principal characters finally meet is an improbability, it’s certainly not an impossibility.
The unobtrusiveness of Eastwood’s direction is Hereafter’s biggest strength. It’s likely that some people may find the film tardy, but the pace worked for me. And so I watched, not as if I was seeing a film, but as though real people were going about their lives on a screen before my eyes. Even the tsunami right at the start of Hereafter does not seem designed in Spielberg fashion to make us gasp. It just happens to happen. Just the way the people in Paris mostly speak French, though English may have been more palatable to an English-film-viewing market. It’s a pity though that at PVR (Ambience Mall) in Gurgaon where I watched Hereafter, those scenes were shown without sub-titles due to what I’ve now been told was an administrative error. At first, as I watched the film, it irritated me since those French conversations are quite long – but well, life doesn’t have subtitles and I still managed to gather that Marie had become a sort of oddity and an embarrassment to her TV station.
Everything about this film is nicely under-stated, from George’s misery and loneliness, to Marie’s beauty and the children’s humour. There is a point gently thrown in about discrimination: who says it’s always against people of other races, religions and nationalities? There is also a flash of a child’s intuitiveness, so different from a psychic’s insights. And it doesn’t matter whether you believe in life after death. When George makes those connections with souls long gone, it’s a reminder that if you have ever lost someone you truly loved, however logical and cynical you may be, somewhere in the deepest recesses of your mind is probably a sliver of a reluctant belief that it could not possibly be ending in the here-and-now; that there just may be a hereafter.
I forgot my handkerchief at home when I went to watch this film. Be warned: take yours with you.
Rating (out of five): ***1/2
Photograph courtesy: http://en.wikipedia.org/wiki/Hereafter_(film)
Posted by Anna MM Vetticad at 10:48 PM