REVIEW 4: THE WAY BACK

It’s a tale of survival so bereft of clichés that many have dismissed it as improbable. But that’s the beauty of Peter Weir’s The Way Back: it shows you not just the lengths to which our human instinct for survival will take us but also our potential for goodness in the most depraved conditions. 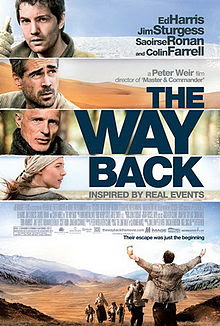 The Way Back is the story of a band of prisoners who escape from a Siberian labour camp in Communist-era Russia during World War II. They manage to escape in the harsh Siberian winter. The men trudge through Russia, China, Tibet and finally reach India. Along the way, a young Polish girl joins them. Only some of that ragtag bunch enters India – don’t ask how many, because The Way Back is not so much about what happens as it is about how!
What strikes you first about this film are its STUNNING locales and cinematography, so lovely that they hark back to the grandeur of classics like Lawrence of Arabia. But the visual gala does nothing to dwarf the magnitude of the human struggles we witness in The Way Back.
The film’s focal point is a Polish prisoner Janusz whose wife was tortured into giving false testimony against him. Consigned to Siberia, Janusz’s only goal is to return to the woman he loves so that she doesn’t spend all her life hating herself for what she did to him. The group that makes it out of the camp with him includes the inscrutable American Mr Smith (Ed Harris), the Russian criminal Valka (Colin Farrell), an artist who trades in erotic drawings with his fellow prisoners, an accountant and others.
But as the tagline tells us, “Their escape was just the beginning.” Through their 4,000 mile trek across frozen lakes, deserts and mountains, the group experience starvation, sub-zero temperatures, blinding sunshine, sandstorms, thirst, poisonous snakes, mosquitoes and every sort of hurdle that nature could possibly throw their way.
The easy thing for director Peter Weir to do would have been to intersperse the unforgiving landscapes in his film with flashbacks to each character’s schmaltzy back story. Instead, his storytelling style is as bare, naked and unapologetic as the burning desert they cross. The drama and emotion in this film are derived not from the characters’ past but from their dreadful present, their doggedness, their team spirit, their weathered faces and swollen feet, and the absolute lack of formulae that you might expect in such a story. No, in their world without rules, they don’t end up turning on each other. Yes, when they chance upon a pack of wolves attacking an animal carcass, they chase the beasts away and tear into the dead creature themselves in such a brutish fashion that it’s hard to watch, yet … when a lone girl joins them they are kind and gentle towards her. And no, her arrival does not cause any sexual under-currents, rivalries for her affections or vile behaviour. Improbable, did you say? Really? Is human goodness completely out of the realm of probability?
In fact, after those splendid vistas, the thing I liked most about this film is the subtle manner in which Irena’s presence impacts the group. I remember watching Indian director Manish Jha’s film Matrubhoomi: A Nation Without Women, a chilling account of a village in north India that has killed off all its baby girls, leaving it with a population of only men. It shook me to the core but it still bothered me back then that the only impact the absence of women had on those men seemed to be related to their sexual deprivation. Is sex a woman’s primary contribution to society?
Clearly not in Peter Weir’s book. The men in The Way Back don’t tell each other much about their past lives before Irena joins them. But there is a thaw in the group with her arrival, each one opens up to her, they all start smiling more. And even the seemingly feelingless Smith begins to look upon the girl with a fatherliness that he seemed incapable of at the start.
With her delicate and fragile looks, Academy Award nominated teenager Saoirse Ronan is the perfect choice for Irena. The rest of the cast too are brilliant and well-chosen. Jim Sturgess (Across the Universe) makes Janusz impossibly charming. And Colin Farrell bestows a weird likeability on Valka’s questionable morals. When the group is scrounging around for food towards the beginning, he brings up the subject of cannibalism, much to the chagrin of his listener. “What?!” asks an incredulous Valka, you mean that’s not why you brought so many people along?! That wry sense of humour is evident in the writing throughout the film. Asked what his first name is, Smith replies: “Mister.” For Indian viewers there are also a pleasant few minutes right at the end when the group crosses the border into India.
For the record, though the trailers say this film is “inspired by a true story”, it is in fact based on The Long Walk by Slavomir Rawicz, a book whose authenticity has been questioned. Be that as it may, this is a fascinating, compelling film.
It’s a film that’s typical of the Peter Weir who created waves with his memorably eerie Picnic At Hanging Rock back in the 1970s. If you felt unsatisfied with that film’s unresolved ending, or you are prone to believe that films like Danny Boyle’s 127 Hours lack drama, then perhaps The Way Back is not your scene. But if you believe that tales of survival need to be told, especially when the men and women in them turn to monsters to save their lives and yet retain their humanity, then do watch this lovely film.
Rating (out of five): ****

Photograph courtesy: http://en.wikipedia.org/wiki/The_Way_Back
Posted by Anna MM Vetticad at 6:24 AM