REVIEW 8: JUST GO WITH IT

Imagine an Adam Sandler film in which there is not a single fart joke, only two cracks involving human excrement, just one crotch-clutching episode and the heroine is the classy Jen Aniston. Yes people, this is Adam Sandler all grown up and mature in comparison with what we’re used to seeing. And for that – among many other reasons – I’d recommend that you just go with it. 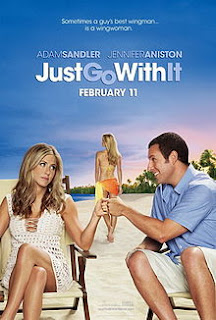 The film is about plastic surgeon Danny (Sandler) who pretends to be unhappily married to seduce women. On that one day when he doesn’t put up a pretense, he makes a connection with a much-younger schoolteacher called Palmer (swimsuit model Brooklyn Decker in her film debut). After a night of passion, when she discovers a ring in his pants pocket (a ring he’s worn in the past to deceive women), he is forced to lie about it because of course the truth would be unpalatable to her. One fib leads to another and so from asking his amiable assistant Katherine (Jennifer Aniston) to play his fake soon-to-be-ex-wife, Danny has to rope in Katherine’s kids to play his fake children, which results in the entire fake family and Palmer taking off for a holiday in Hawaii accompanied by the fake boyfriend of the fake soon-to-be-ex-wife.
Whoa, there are further complications in this comedy of errors but first, let’s talk about whether the story rings a bell. Yes, in David Dhawan’s Maine Pyaar Kyun Kiya Salman Khan played a doctor who falls for a much-younger woman (Katrina Kaif) but asks his assistant (Sushmita Sen) to pretend to be his wife to get him out of his own web of lies. But no, it’s not what you are hoping. The producers of Just Go With It have not copied MPKK. The truth is that though MPKK’s screenplay was attributed to Rumi Jaffrey, the Hindi film was in fact lifted from the 1969 Hollywood classic Cactus Flower (starring Walter Matthau, Ingrid Bergman and Goldie Hawn) which in turn was a remake of a Broadway comedy that was taken from a French play. Just Go With It is a legitimate remake and so the credits read: “Screenplay by Allan Loeb and Timothy Dowling. Based on “Cactus Flower” Screenplay by I.A.L. Diamond. Stage play by Abe Burrows. Based upon a French play by Barillet and Gredy.” And that, my dear Bollywood, is how it should be done.
Just Go With It is a hilarious film that requires a suspension of disbelief from viewers who may wonder why two kind, generous, stunningly lovely women such as Palmer and Katherine would be interested in a non-hottie like Danny. Katherine is even aware that he’s a lying pig who has cheated his way into hundreds of women’s beds in the years since he had his own heart broken by one woman. Well, apparently that fragmented organ is made of gold – I’m taking the film’s word for it since those girls could clearly see something I couldn’t.
Besides, Sandler has an unthreatening screen presence that makes it hard to despise him even when he’s playing a womaniser. And he shares an easy chemistry with Aniston. The former Friends star lights up the screen every time she appears. She shines in a role that gives her a chance to swing between being a plain office assistant and a glammed-up fake spouse whose bosom Danny can’t take his eyes off; between being a gentle soul in reality and an acerbic shopaholic pretend wife with a wandering eye. You can see the actress is having fun in this film.
For the full-blooded heterosexual males in the audience there’s a scene in which both ladies strip down to their bikinis for a swim. Beware: it’s a scene that would give most women in the audience a complex! As if all that beauty wasn’t sufficient, Nicole Kidman has an entertaining cameo in the second half. As for those kids, Maggie and Michael are just the sort of children who could have crossed the line from being cute to irritatingly precocious. But little stars Bailee Madison and Griffin Gluck strike a perfect balance while playing Katherine’s son and daughter who see in Danny’s dilemma a chance to blackmail a rich and vulnerable grown-up. Madison’s “British” accent is particularly delightful. And thankfully, the scenes where Danny bonds with the children at no point are mushy & over the top.
There are some problems with Just Go With It though that the writers could have easily fixed with a tweak here and there. Seriously, WHAT is it about Danny that makes Palmer flip for him so completely in one night? What is it about her that makes Danny feel that she may be “the one” within a matter of hours? Sure she has a great body, but so does the entire parade of women who hop into Danny’s bed, so what is special about her? In the end, laziness takes over the writing team so completely, that they just sweep her aside like a minor inconvenience so that the couple who are meant to be, end up together. That’s unfortunate, because Decker has a warm screen presence and she deserved better. Perhaps the director knew we’d all be having such a blast, that we wouldn’t notice.
And the thing is, I did notice, and yet I had a rollicking time with this funny, sweet, pleasant and largely non-offensive film. So don’t ask too many questions while you’re watching. Like I said at the start, just go with it!
Rating (out of five): ***1/4
Photograph courtesy: http://en.wikipedia.org/wiki/Just_Go_with_It
Posted by Anna MM Vetticad at 2:44 PM