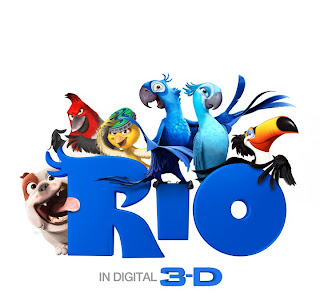 Rio is one of those good-but-not-great movies that we need to happen to us ever so often, to help us appreciate the great ones. It’s an entertaining-while-you-watch-it-yet-not-so-memorable 3D animation flick about the adventures of Tyler Blu, a rare blue macaw who was abducted as a child from the wild, then rescued by a girl called Linda. Fast forward to the present. Both characters are now adults: she’s a bespectacled book-shop owner in Minnesota, he’s a bird who has never taken flight. They’re best friends of course. That is one of the reasons why Linda resists strongly when an ornithologist arrives at her doorstep to persuade her to bring Blu to Rio where he can mate with the only other surviving blue macaw in the world, Jewel, and prevent the extinction of their species.
Most of the action takes place in Rio di Janeiro, home city of director Carlos Saldanha who was the co-director of the first Ice Age film and director of its two sequels. Rio gives him an opportunity to affectionately capture the look, feel and colour of Brazil. And he does it well, laying out for us a canvas filled with bright, eye-catching splashes of paint, and making even the poor quarters with their narrow alleyways & tin roofs look pretty.
In fact, everything about Rio is pretty. Very pretty. From the sequences of energetic avian dancing, to the bursts of colour around every corner, from Blu and Jewel’s inevitable romance to their madcap trio of city-bred feathered friends. But pretty is not the same as beautiful, and the film as a whole never quite goes the distance from being enjoyable to being remarkably impactful. The problem is that there’s nothing terribly unique about the treatment, and the plot is … well … predictable: you know right from the start that more bird poachers will show up to throw hurdles in the path of true love, a true love that’s bound to happen between Blu and Jewel, and between Linda and the ornithologist. Besides, the themes of preservation of the species, the call of the wild, being who we are meant to be and going back to where we belong have been explored repeatedly in Hollywood animation features, often in far more imaginative ways.
The characters in Rio are voiced by some major – and talented – stars. Jesse Eisenberg’s vibrant Blu is a nice contrast to his deliberately dull Mark Zuckerberg in The Social Network. Anne Hathaway as Jewel is suitably spirited and dynamic. Their buddies Pedro, Nico and Rafael (Black-Eyed Peas’ Will.I.Am, Jamie Foxx and George Lopez) are a lively bunch who contribute to some of this film’s funniest moments. And my pick of the lot is Jemaine Clement as Nigel the evil cockatoo who works for men who prey on birds. But none of these stars – or the characters they voice – is as heart-stoppingly huggable as that crazy warthog from The Lion King or Lightning McQueen (Owen Wilson) from Cars who was so damned brilliant that I forgot he was an automobile, and not a man, just minutes into the film.
The songs in Rio range from bland to pleasant. Though Will.I.Am and Jamie Foxx pitch in with their singing voices, and a couple of the numbers were hummable, I can’t name one that has stayed with me. What did stay with me though was the rivetting choreography that was elevated many storeys by Saldanha’s joyously bright palette. Rio is a pleasant enough experience. But it’s not had a lasting impact on me. I guess what I’m saying is that it was good while it lasted, for me and Rio. But our affair ended pretty soon after I left that movie hall.
Rating (out of five): ***