REVIEW 21: THE IDES OF MARCH 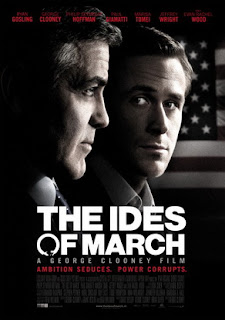 He forgot the golden rule of politics: you can go to war, send the country to the brink of ruin … but never f*** the intern.
Who is “he”? Aha, I will not tell! George Clooney’s latest directorial venture The Ides of March is a political drama based on a screenplay by Clooney, Grant Heslov and Beau Willimon, adapted from the play Farragut North by Willimon. It stars Clooney as Pennsylvania governor Mike Morris hoping to get the Democratic Party nomination for the next US presidential election. He’s a decent fellow who hates giving in to the political manoeuvring that’s inevitable if you wish to play the game. But don’t nice guys finish last? Well, not if they have on their team a campaign manager as brilliant as Paul Zara (Philip Seymour Hoffman) and his genius media secretary Stephen Meyers (Ryan Gosling). The film revolves around Stephen, a hard-as-nails operator who is more naive than he imagines, and is with Governor Morris because he genuinely believes in him.
Nothing, however, is as it seems in this seemingly sedate film with storms incessantly brewing below the surface. Like Clooney’s earlier directorial outings, The Ides of March too is a mood piece. Watching it is like being in a spacious art gallery. You don’t see actual movement on the canvases, and yet you are aware that there’s a world of motion out there beneath those brush strokes. There’s drama minus surface melodrama. And as usual, the cast is impeccable.
In Crazy, Stupid, Love earlier this year, when Gosling took off his shirt for the first time before his girlfriend, she involuntarily exclaimed: Oh my god, that looks like Photoshop! Right you are, girl! This man seems too hot to be real. Yet he overcomes the hurdle that great looks can sometimes be, to deliver a performance in this latest film that’s restrained and touching.
But the air-conditioner in the hall where I watched The Ides of March was not effective enough to handle a film starring both Gosling and Clooney. The veteran actor-director’s HQ (hotness quotient) rises every year even as the furrows on that brow deepen and the hair gets grayer. Clooney with his undeniable good looks, easy charm and command over the craft is perfect for the part of the quintessential good guy whose instincts rebel against mucky politics. Another star who lends great dignity to advancing years is Marisa Tomei whose age-enhanced face is such a delight to the eyes. Playing the ingratiating-and-terse-by-turns political reporter, Tomei reminds us once again that Hollywood has not given her her due in terms of roles despite her memorable Oscar-winning performance in My Cousin Vinny (1992).
The film’s primary strength is its amazing cast. Their performances and the film’s atmosphere of intensity are further enhanced by cinematographer Phedon Papamichael’s extreme close-ups and the production design which favours greys, browns and beiges, building up to the inevitability of cold cynicism in the filthy world of politics.
If there is a flaw in the film, it is the somewhat simplistic and contrived nature of the ending. After a series of neat and unpredictable twists, I thought Morris capitulated to circumstances more easily than I’d have expected, and the change in Stephen’s public demeanour (from smooth-talking charmer to openly harsh cynic with the press) did not quite fit. So yes, the finale of The Ides of March is a tad underwhelming and feels a little bit like the writers weren’t sure how to wrap it up. But before the end there is an entire film with incredible actors … and that film is a compelling watch!
Rating (out of five): ***1/2
Photograph courtesy: http://en.wikipedia.org/wiki/The_Ides_of_March_(film)

Posted by Anna MM Vetticad at 5:28 AM No comments:

REVIEW 20: THE ADVENTURES OF TINTIN: THE SECRET OF THE UNICORN (3D) 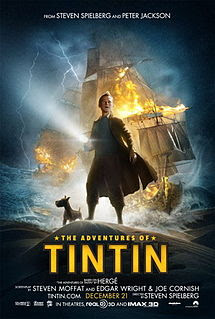 “Blistering barnacles” and “thundering typhoons”, an ageless hero, his alcoholic associate and canine best friend … I can go on about the reasons why I’ve always enjoyed Tintin. Earlier this year, after resisting the temptation for months on end, I even bought myself the 21 DVD set of animated Tintin films. I can’t claim to be as much of a Tintin expert as the little fellow I met in the lift right after this film’s Delhi premiere, but I’d say I know the boy reporter from Belgium rather well. Which is why it’s such a joy to report back to you that I really had a good time watching this film!
Directed by Spielberg, The Adventures of Tintin: The Secret of the Unicorn draws on all the Tintin books created by the Belgian artist Herge, though it is primarily based on three of them: The Crab with the Golden Claws, The Secret of the Unicorn and Red Rackham’s Treasure. It’s a performance capture 3D film that has used actor Jamie Bell to create the character of Tintin, Andy Serkis (Gollum in The Lord of the Rings trilogy) for Captain Haddock, and Daniel Craig a.k.a. James Bond as the evil Ivan Ivanovitch Sakharine.
The film starts with Tintin and his dog Snowy ambling through a marketplace when our hero’s eye falls on a model of a ship called the Unicorn. As soon as he buys it, he’s accosted by a stranger desperate to buy it from him. The ship is later stolen from Tintin’s flat, sending him off on a series of adventures that take him from the ocean to a burning desert, all the way to a port town in Morocco and back home. Along the way he befriends Captain Haddock and briefly encounters Bianca Castafiore whose glass-shattering singing voice is familiar to all Tintin buffs.
Spielberg’s film is a humorous and suspenseful action adventure filled with high-adrenaline fights and chases, snappily edited by Michael Kahn and further elevated by John Williams’ music. 3D adds to the gasp-worthiness of The Secret of the Unicorn with cars racing towards us, the ocean threatening to splash out at us, and those planes and cranes hurtling around as if they may just lop off our heads. In some scenes the film does suffer from the usual dimness that is the bane of 3D films, but I’m not going to crib, considering the pluses the third dimension offers.
Some of the human beings in this film marvellously match up to Herge’s colourful world. Serkis’ Captain Haddock especially took my breath away because he feels like an entirely live human being, not the product of performance capture, and looks precisely like the Haddock of the books. I’m not sure why Spielberg chose to make him sound Irish, but I swear on all those billions of blue blistering barnacles, he seems like he just rose out of Herge’s two-dimensional pages and ballooned out into a whole, live man! The other remarkable characters are the film’s main villain Ivan Ivanovitch Sakharine and the pirate Red Rackham.
Disappointingly though, the least appealing players in the film for me were Tintin himself and Snowy. Quite in contrast to Haddock’s lively and dynamic face, Tintin appears strangely flat and a tad expressionless. I’m not sure whether this is the fault of technology or Jamie Bell’s acting, but it took away some of the joy of watching this otherwise delightful film. Another downer is the fact that Snowy is not as central to the proceedings as you’d expect. We also don’t get to know the dog’s thoughts as we do in the books, which is a pity because I’ve been curious all this while about how Spielberg would handle that.
Still, the overall impact of this film is positive, energetic and thoroughly entertaining. Unlike James Cameron’s visually revolutionary Avatar, the technological milestones crossed by The Secret of the Unicorn don’t overwhelm the plot. In the past, I’ve found myself wondering why directors bothered with performance capture when they could just as well have opted for live action, but here the technique somehow manages to capture the look of Herge’s art work more effectively than a regular film might have. Considering the quantum of modern technology that has been invested in this film, it’s also lovely to see that Tintin’s cellphone-less, computer-less world comes across in the film as timeless, yes, but not dated at all.
The Adventures of Tintin: The Secret of the Unicorn was released in October in Europe – where Tintin is traditionally strong – after which it’s come to India six weeks before the US release. The idea has been to create worldwide hype before taking it to the moneyed audiences in the US, a country where Herge’s comics never achieved the popularity they did elsewhere. If this film fares well at the box office, co-producers Steven Spielberg and Peter Jackson plan two sequels. Rarely has a film’s ending been such an unabashed ad for a follow-up as it is in The Secret of the Unicorn. So here’s my wish list for Parts 2 & 3 if they happen: I want Tintin to look more real, I want Snowy to think or speak, I’d like Thomson and Thompson to have more verve and chemistry, and oh how I’m waiting to meet Professor Cuthbert Calculus! Fingers crossed for Steven and Peter!
Rating (out of five): ***1/2
PS: Don’t miss the opening credits and look out for the tribute to Herge in the very first scene
Photograph courtesy: http://en.wikipedia.org/wiki/The_Adventures_of_Tintin_(film)
Posted by Anna MM Vetticad at 9:33 AM 6 comments: