The question all fans of Cars are asking is this: is Cars 2 as good as Part 1? And then there’s the other question everyone asks these days: does the 3D make a difference?
Let me be open about my feelings for Cars: from the moment I began that emotional ride with Lightning McQueen (voiced by Owen Wilson) back in 2006, I’ve been in love. So bear with me if I answer your question with a “no”.
No, Cars 2 is not as good as Cars. But yes, it’s still a good film. Whaddyaknow, the switch to 3D actually enhances the experience. And the makers have clearly worked hard to incorporate elements in the story that would benefit from the addition of a third dimension.
For those who didn’t watch the first film, there’s just one bit of information you need before you enter the theatre: this is a film about cars that are not merely cars but anthropomorphised automobiles. So we’re back in the small town of Radiator Springs, where Tow Mater the rickety rusted tow truck (voiced by Larry The Cable Guy), is waiting for the return of his friend Lightning McQueen, the champion racing car. McQueen asks Mater along on his next race which is being organised by the manufacturer of an alternative, eco-friendly fuel. We already know from the film’s high-adrenaline opening sequence that this one will be different from Cars. As things start going wrong on the race track, Mater gets unwittingly drawn into a web of international espionage, and the action shifts from those competing cars to the behind-the-scenes intrigue.
The biggest difference between Cars 1 & 2 is that the sequel moves away from sleepy Radiator Springs and zips around the world, from Japan to Italy to the UK. The other change is that the focal point of this story is not Lightning McQueen but Tow Mater, which is both a good thing and a bad thing.
Mater is the kind of bumbling, well-meaning chap who the world laughs at because they don’t see his heart of gold. McQueen does, which gives the film an opportunity to serve us some lessons in friendship, loyalty and accepting people as they are. But the selling points of Cars 2 are its neat action sequences, high-speed chases and shootouts, the fantastic visual effects (the ocean and Europe are particularly wow!), the amazing detailing in the depiction of these geographical locations (you won’t believe how authentic the Big Ben, Buckingham Palace, St Paul’s Cathedral and London’s other architectural wonders look) and its lovely sense of humour.
But all these elements are also the reason why I say that though Cars 2 is a good film, it doesn’t match up to Cars. It’s the emotional quotient that made the first film what it was. Five minutes into the story, I had forgotten that I was watching automobiles and not real human beings on screen. It had its share of races too, but Cars also made me cry and sigh, laugh and smile; it made me long for McQueen to hook up with beautiful Sally. I could feel what he was feeling, I could see her through his eyes, and I could see him through the eyes of the bitter, elderly Doc Hudson. Cars was a very human story. Cars 2 is more like a James Bond film in 3D animation. Among other things, I just don’t see why the writers couldn’t come up with a story which gave as much importance to the wonderful Mr McQueen as it does to Mater. It makes no sense to relegate the charismatic hero of Part 1 to a supporting character whose voice we barely get to hear in Part 2. And surely the lovely Sally deserves more than the few seconds of screen time given to her! With Sally hardly there, and the only ‘woman’ worth mentioning being the British secret agent Holly Shiftwell (voiced impeccably by Emily Mortimer), Cars 2 becomes a mostly-male enterprise.
What that means is that it’s lots of fun, but unlike Cars, it’s not on my personal list of all-time favourite Hollywood animation films. Well, that’s all right, I guess. Because despite everything I’ve just grumbled about, Cars 2 is still a highly enjoyable ride. Larry the Cable Guy (the stage name of the American actor Daniel Lawrence Whitney) is hilarious as Mater. But with Owen Wilson’s Lightning hardly on the scene, my picks of the voice cast are Mortimer and Michael Caine who lends remarkable dignity to Shiftwell’s colleague Finn McMissile.
Do watch out for the Pope and the Queen of England in Cars 2. And if you don’t fall off your chair laughing when Prince William makes an appearance, then I’ll skip an episode of my favourite TV serial for you. What on earth do I mean by this last paragraph, did you ask?! Well, watch the film and you’ll know.
Rating (out of five): ***1/2
Photograph courtesy: http://en.wikipedia.org/wiki/Cars_2

Posted by Anna MM Vetticad at 9:08 AM No comments: 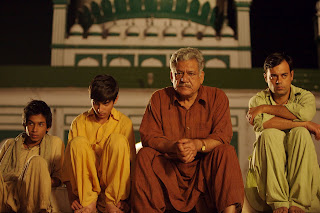 West Is West is the sequel to the British film East Is East that introduced Jehangir a.k.a. George Khan to us. Twelve years have elapsed since the release of the first film. But in the story, only five years have passed since George alienated his children by imposing his Pakistani values on them although they’ve lived all their lives in the UK. East Is East was set in 1971 in the small town of Salford, England. In West Is West, we’re still in Salford but the year is now 1976. George and his English wife Ella are still running their fish-and-chips shop, but six of their children have moved out and they’re left with the youngest, Sajid. The teenager rebels against his British Pakistani father’s strictness, while also coping with racial slurs in school and a well-meaning but patronising teacher. When the boy is caught shoplifting one day, George decides to give him a dose of rural Pakistani life and carts him back to the home country, leaving Ella behind. How Sajid gradually comes to terms with his roots, how his father copes with his own return to a home he’s not visited in three decades, how this affects his Pakistani first wife and daughters, and how the emotional turmoil impacts Ella is what West Is West is about.
Be warned, this film is more sedate, much quieter than its precursor, and not as unrelentingly funny. It moves at a deliberately languid pace. So if you’re in a mood for Salman Khan and Ready, then West Is West is not the film for you. But if you are keen on a sublime saga of immigrant identity and confusion, told with a sense of humour through endearingly real people with shades of gray, then this film is just up your street.
The performances are excellent. Om Puri and Linda Bassett as Jehangir and Ella are top notch, just as they were in the first film. After years of doing nonsensical roles unworthy of him in Bollywood, Puri sinks his canines into West Is West with relish. As you watch him here, it’s hard not to feel saddened by the tragedy of a great actor whose home industry has few decent films to offer him. Stepping into the role of Sajid is loveable debutant Aqib Khan who fits the part to a T. The earthy new friend he makes in Pakistan is played in a delightfully cheeky fashion by Raj Bhansali who you may have seen earlier in the Bollywood kids’ film Chain Kulii Ki Main Kulii. And even if these two youngsters don’t floor you, unless your heart is both a rock and a hard place you’re bound to lose that vital organ to Ila Arun playing the first Mrs Khan, Basheera. In her lined face, her tired eyes, her anger that bursts out just once against the husband who abandoned her in the prime of her life, you can read the story of numerous real-life Asian women who have suffered the same fate at the hands of duplicitous immigrant spouses.
One jarring note is provided by the wise Pirsaab who dispenses lessons on life to Sajid. He has delightfully mischievous eyes and dialogues to match, but his accent is too foreign to those parts. Even if he’s a wanderer who has chanced upon this little Pakistani hamlet on a journey from the West, he appears to be well-settled in the area which suggests that he’s been around long enough to have pared down the seemingly European inflections in his speech. This is a bit of a downer in a film that otherwise blends the various languages and accents of its characters so smoothly.
British Pakistani writer Ayub Khan-Din – who also wrote East Is East – is concise and to the point with his words. “I thought we had become nothing but an address to you,” Basheera tells Jehangir one day. The film is helmed by Andy DeEmmony, not Damien O’Donnell who directed Part 1. Like the writing, DeEmmony’s direction too is quite appropriately shorn of frills, as is the cinematography. The music by Bollywood trio Shankar Ehsaan Loy and Sufi Pakistani artiste Saeen Zahoor feels like it has sprung right from the soil on which Jehangir Khan was born. In fact, music becomes the most telling and amusing metaphor for the Khan family’s varied cultural influences when Sajid’s elder brother Maneer (Emil Marwa) – a European music fan – falls for a Nana Mouskouri-lookalike in the bylanes of his father’s ancestral village. For the record, the portions of the film set in Pakistan were in fact shot in India.
The most moving scene in the film is when Jehangir’s two wives come face to face and convey their hurt to each other despite the language barrier. It left me with moist eyes. But does the film go soft on Jehangir’s transgressions in the interests of political correctness?
Perhaps for this reason, the film is not as hard-hitting as I was hoping that the sequel of East Is East would be. Or perhaps the flaw is in me, because I wanted the film to pass judgement on this man who so ruthlessly deserted a wife and two children, and assuages his conscience by providing financial support to them. Well, real life often does let off men like Jehangir lightly. If you’re willing to accept that, then you might see West Is West for what it is: a bitter-sweet, funny-sad story of a guilt-ridden, emotionally conflicted old man and his culturally conflicted son. It touched me, and I suspect it will touch you too.
Rating (out of five): ***

Posted by Anna MM Vetticad at 7:04 AM No comments: